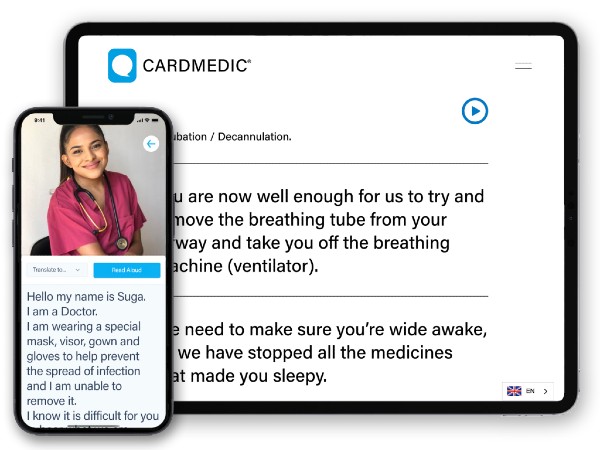 During the pandemic, Dr. Rachael Grimaldi, a practicing anesthesiologist at Great Ormond Street Hospital in London, on maternity leave when she read an article about a patient who was in intensive care in the UK with COVID and was scared because he could. I don’t understand the medical staff through their PPE.

She soon realized that tThe barriers to good healthcare communication have been around for a long time. While PPE was the one barrier that emerged as a result of the pandemic, there are other barriers including those related to language, such as hearing impairment and blindness, cognitive problems, learning disabilities, stroke, dementia and literacy problems .

“This affects about 50% of the population. So it’s huge and this group of patients suffer from huge health inequalities, poor outcomes, they are at higher risk of getting sick or dying, they stay in the hospital longer. They have higher readmission rates, their outcomes are worse too, and they take less medication, they have more mental health issues, and there’s a lot of litigation: 30% of medical litigation is due to poor healthcare communication,” she told me in an interview.

The scope of the problem was an impetus for CardMedicwhere she now serves as CEO: It’s a digital health solution designed to improve communication between medical staff and patients through the use of digital flashcards.

On Tuesday, the company announced it was crossing the pond and expanding into the US market with five new partnerships.

This is how CardMedic works

CardMedic has created what Grimaldi calls an “A-to-z library” of scripts, pre-written and pre-translated, that healthcare workers can select, show to the patient on a screen, and use as conversation guides. The company also does this, she explained, because there is some standardization of clinical practice and the way doctors speak to patients, with often repeated phrases.

For example, an anesthetist or critical care doctor and may need to explain to a patient how to be put on a ventilator; At CardMedica, they explained it in English, following the script in the app and using phrases like “You’re unwell, you need some help breathing” or “We’ll put you to sleep”. You can then use the app to convert these phrases into the patient’s speech; if the patient can’t read, the doctor can have the app speak the sentence out loud, or if they’re hearing-impaired, they can change it to videos in sign language with subtitles underneath.

Of course, the conversation won’t always follow the pre-translated script, so Cardmedic has one built-in too Chat tool that allows the doctor and patient to speak or type in different languages, allowing for two-way communication.

Patients can also download the app to their device, which allows them to favorite the phrases the doctor sends them so they can appear in their own library to show to their families or carers. There is also a section called Patient Questions where the patient can select frequently asked questions from the staff e.g. B. “What’s wrong with me?” or “What do my test results show?”

To date, CardMedic contains 800 scripts for a wide range of specialties, all written by healthcare and allied healthcare professionals. It can currently translate these into 20 languages, with another 10 in the pipeline.

So far the app is around a year old, in that time it has been downloaded by 20,000 patients, with 55,000 users in 120 countries. While the company is still tracking the ROI of patient outcomes and how that translates into savings for hospitals, there was a statistic Grimaldi shared with me: At the onset of the pandemic, the company conducted a service assessment that examined patients’ confidence in healthcare workers’ understanding of PPE. CardMetric showed a 28% increase in patient confidence in staff understanding, up to 95%.

Expansion into the US

CardMedic has so far integrated its technology into 13 healthcare systems across the UK through a partnership with the National Health Service. The company also received the UK Prime Minister’s Points of Light Award and was thanked by the Prime Minister for the company’s achievements in supporting healthcare workers and patients during the COVID-19 pandemic.

However, now that it has entered the US, the company expects to grow rapidly with its new one Market that will account for the lion’s share of sales over the next five years.

It helps that CardMetric is entering the country with five new partnerships, including Nor-Lea Hospital District, a critical access hospital in Lovington, New Mexico, which is the first rural healthcare organization to use CardMedic’s solution; It uses the app at its 25 inpatient bed hospital site.

CardMedic also works with Brigham and Women’s Hospital, Harvard Medical School’s second-largest teaching hospital, which is testing the CardMedic solution to help its patients and hospital staff, and with the Texas Medical Center Innovation HealthTech Accelerator Program, which uses CardMedic as a one of these has named its newest startups into its accelerator program.

Other partnerships include ScaleHealth, a health innovation ecosystem accelerating the impact of health innovation on a global scale, and MassChallenge, an organization dedicated to supporting innovation and entrepreneurship through collaboration and development, which has invited CardMedic to its HealthTech Accelerator .

In addition to the Nor-Lea Hospital District and Brigham and Women’s Hospital, the company also plans to conduct a pilot with Penn State Health. The hope is that in a year the company will have more licenses with hospitals in the US and start growing, but as Grimaldi put it, “in a focused way and by gleaning insights from working with these other areas of the business.” Market the metrics, reinforcing our value proposition and understanding of ROI, to then scale into the larger academic hospitals.”

“We have a global solution to a global problem, but some healthcare organizations have great translation services and translator support. And there are others, for example rural hospitals or FQHCs or smaller niche specialty networks, like in pediatrics, where they’ve gotten less innovation headed. So for us, it’s about where we can add the most value in the US market. It’s all about supporting the underserved, underrepresented communities,” she said.

One thing the company didn’t have to do was change the service for the US market, aside from minor language changes such as: B. Change from UK ECG to US ECG.

“It’s more of that subtle nuance than the broad overall content, because it’s fairly universally translatable and accepted as a solution. It’s the same in the UK and US, you have translators in person, by phone and by video, it’s all the same practice. They have sign language interpreters, the same speech and language therapists or pathologists, learning disability nurses, all clinical or communication support roles are the same. So it’s more about that nuance of customizing the content,” she said.

While there will obviously be a financial return with CardMedic, something the company is in the process of figuring out how to quantify, ot look at the bigger picture in terms of its impact on healthcare and the world.

This means making sure that a positive social impact worldwide, explained Grimaldi.

“We want CardMedic to be able to break down communication barriers, empower these underserved populations, put them at the heart of that shared decision-making with clinicians, give them a voice, empower them, and improve overall health literacy for them huge group of patients struggling because of communication difficulties,” she said.

That means launching it in developing countries, which the company will do through a foundation it is currently establishing Providing grants to healthcare entrepreneurs in developing countries and funding training for community health workers in refugee camps. The company has has worked with refugees in Kenya using StepUp.One and also had a team using the app during the war in Ukraine.

“Success is not just commercial success in generating X revenue from X thousand licenses, but it is also success in reaching vulnerable populations worldwide, all of whom need access to fair and accessible health information in ways they understand and are used for it makes sense. that they can get the most out of their healthcare interactions,” said Grimaldi.