Mongabay Founder and CEO Rhett Ayers Butler has won the 2022 Heinz Award for the Environment for his efforts to advance environmental journalism worldwide.

“The Heinz Award is an unexpected and humbling honor,” said Butler. “The recognition by Teresa Heinz and the Heinz Family Foundation is a testament to the incredible work the Mongabay team and their dedicated network of contributing journalists do every day.

“Now is a particularly critical time for environmental journalism, given the global challenges we face and the shrinking of press freedom around the world,” he continued. “Journalism can make an impact in the real world by raising public awareness, identifying problems and solutions, and holding those in power accountable.” 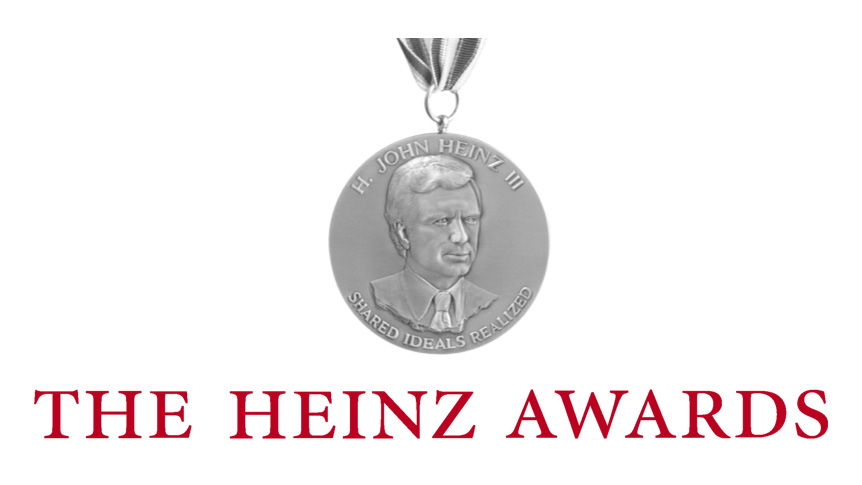 The Heinz Awards honor the late United States Senator H. John Heinz III and have been presented annually since 1993 to honor excellence and achievement in areas of concern to the Senator. It is one of the highest honors for scholarship, scholarship and advocacy in the United States and recognizes people who have “shown a passion for excellence that transcends intellectual curiosity; a concern for humanity rooted in a deep sensitivity to the welfare of others; and a broad vision that goes far beyond the particular and encompasses something universal.”

Previous winners of the award’s environmental category include Paul and Anne Ehrlich, Amory Lovins, Jane Lubchenco and James Hansen. Teresa Heinz, chair of the Heinz Family Foundation and founder of the Heinz Awards, said Butler’s efforts exemplify the kind of enduring and impactful work the award is designed to recognize.

“The pace of environmental degradation, deforestation and habitat loss due to human activity is devastating, but Rhett has responded with courage and determination, creating a platform that empowers the world with critical news information collected with the highest journalistic and scholarly integrity,” said Heinz . “Mongabay journalists work at the intersection of human rights and the environment, holding those responsible for the management of natural resources to account, prompting investors to scrutinize financial investments and helping prevent deforestation.

“Now more than ever, the world needs people willing to take on seemingly insurmountable challenges to protect our precious natural resources,” continued Heinz. “We honor Rhett for his fearlessness and for inspiring in others a joyful appreciation for our natural world and a commitment to protecting the planet we share.”

“On behalf of the board, employees, correspondents, supporters and readers of Mongabay worldwide, we are delighted that Rhett is receiving this recognition for his outstanding leadership and vision,” said Board Chairman Holt Thrasher. “Achieving the breadth and quality of Mongabay’s investigative reporting in the face of the growing challenges facing journalists worldwide is a triumph of Rhett’s tenacity and dedication to this work.”

Mongabay was born out of Butler’s interest in the outdoors, which was nurtured from an early age by spending time outdoors. The event that sparked his decision to become involved in environmental issues was the destruction of a rainforest in Borneo shortly after he visited the area.

“The destruction of this forest inspired me to write a book about rainforests to raise awareness of what is happening to these wonderful places,” said Butler. “I wrote the book for effect, not for money. Instead of publishing the book, I put it online for people to read for free. That was when Mongabay was born.”

From these humble beginnings, Mongabay has grown into a respected news service whose information has reached more than a billion people and provides journalists with a consistent opportunity to cover environmental issues around the world. Mongabay also has an educational initiative for children, publishes video content and podcasts in multiple languages, and offers scholarships for young and aspiring journalists.

“Mongabay’s rise to become one of the world’s most read environmental news sources is a powerful demonstration of what’s possible when just one person has the interest and passion for the outdoors that Butler has,” said Jeannie Sedgwick, Mongabay board member and former director of the conservation program of the David & Lucile Packard Foundation. “Butler has built a vast network of outstanding journalists covering critical issues in numerous countries, reaching millions of people every month. And he has done all of this while creating a strong organizational culture of diversity and equity. This recognition is well deserved and greatly appreciated.”

For his part, Butler said he prefers to focus on the achievements of the Mongabay community rather than his own.

“None of this would have been possible without the support of our donors, the interest of our readers, and the hard work of our team,” said Butler. “Mongabay’s influence has grown far beyond what I could have ever imagined when I founded the site out of a love and appreciation for nature.”

Mongabay’s reporting is produced by five international bureaus publishing in 10 languages ​​including Indonesian, Spanish, Brazilian Portuguese and Hindi. It also has a major office in India and a rapidly growing program in Africa, and the work of all these teams is translated into French, Italian, German, Japanese and Simplified Chinese by a dedicated team of translators.

Consistent with Butler’s philosophy of making reliable and objective information about the environment available as widely as possible – so that a wide range of readers, from government officials to business leaders, scientists, citizens, educators and policy makers, can make informed decisions and educate themselves about their environment – ​​the site’s content is published on a Creative Commons basis, allowing other media outlets to use our team’s reporting to advance the conservation literacy of their own readers, regardless of the language in which they publish.

The large amount of information shared and the ease with which it can be accessed (the site’s simple design and use of small images also makes it easy for anyone to load, regardless of the speed of their internet connection) has resulted in many tangible impacts over the years . Many of them are detailed here – from changes in the management of a major Chilean national park to the halting of a uranium mining project on a tiger reserve in India to a company being delisted from the London Stock Exchange – underscoring Butler’s assertion of journalism’s importance of impact in the real world by raising public awareness, identifying problems and solutions, and holding powerful individuals and corporations to account.

Named after an island off the coast of Madagascar that Butler visited as a volunteer while in college, Mongabay has also launched many new initiatives, including a data platform that will make environmental data more widely available and a free online tool to help people do it helps identify high-quality reforestation projects to support that match their interests and motivations, Reforestation.app.

Stay up to date with all the news, developments and opportunities at Mongabay by signing up for the free weekly newsletter and following @mongabay on social media channels: Those using LinkedIn can connect directly with Butler via their profile there to step.

In addition to reporting for Mongabay and leading the organization, Butler is the co-author of a number of publications published in scholarly journals and regularly lectures at universities on trends in conservation, forests, conservation technology and journalism. He is an Adjunct Professor at Arizona State University’s Center for Global Discovery and Conservation Science and an Advisory Board Member for the K. Lisa Yang Center for Conservation Bioacoustics at the Cornell Lab of Ornithology.

Learn more about Mongabay’s educational programs, reporter opportunities, grants, internships, and donation options here, and learn more about its reach and impact in the Impact section.

Butler is also a sought-after expert on tropical forest issues and is often cited in publications ranging from The New York Times to Bloomberg. From the potentially monumental impact of Brazil’s upcoming presidential election on Amazon forest policy to Indonesia’s renewed forest protection agreement, hear him talk about the latest tropical forest trends and news on Mongabay’s latest podcast episode here: 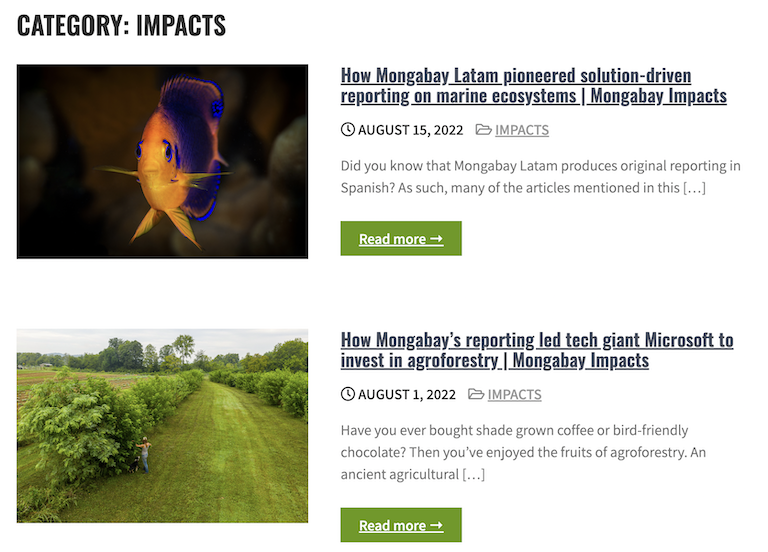 Please leave your thoughts and wishes for Mongabay’s next 23 years and beyond in the comments section below.