DUBAI, United Arab Emirates – Iranians on Wednesday experienced a “near-total” internet blackout amid days of mass anti-government protests over the death of a woman who was being held by the country’s vice squad for allegedly violating a strictly enforced dress code.

An Iranian official had previously suggested such measures could be taken for security reasons. The loss of connectivity will make it harder for people to organize protests and share information about the government’s ongoing crackdown on dissent.

Iran has seen nationwide protests over the death of 22-year-old Mahsa Amini, who was arrested for allegedly wearing the mandatory Islamic headscarf too loosely. Protesters have clashed with police and have called for the demise of the Islamic Republic itself, even as Iranian President Ebrahim Raisi addressed the UN General Assembly on Wednesday.

The protests lasted a fifth day on Wednesday, including in the capital Tehran. Police there fired tear gas at protesters who shouted “death to the dictator” and “I will kill the one who killed my sister,” according to the semi-official Fars news agency.

Witnesses in Iran, who spoke on condition of anonymity for fear of reprisals, said late Wednesday they could no longer access the internet with mobile devices. 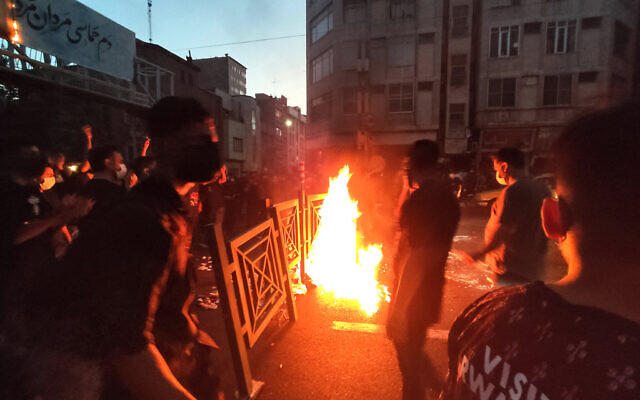 Demonstrators light a fire and block the street during a protest against the death of a woman arrested by morality police in downtown Tehran, Iran September 21, 2022. Photo taken by a person not employed by the Associated Press and obtained by the AP outside of Iran. (AP photo)

“We see that internet services, including mobile data, have been blocked in Iran for the past few hours,” Doug Madory, head of internet analytics at Kentik, Inc., a network intelligence company, said late Wednesday.

“Given the current situation in the country, this is probably a government action,” he said. “I can confirm a near-total internet connectivity collapse for cell phone providers in Iran.”

NetBlocks, a London-based group that monitors internet access, had previously reported widespread disruptions to both Instagram and WhatsApp. Facebook parent Meta, which owns both platforms, said it was aware that Iranians were being denied access to internet services. “We hope that their right to be online will be restored quickly,” it said in a statement.

Earlier on Wednesday, Iranian Telecoms Minister Isa Zarepour was quoted by state media as saying certain restrictions could be imposed “for security reasons,” without elaborating. 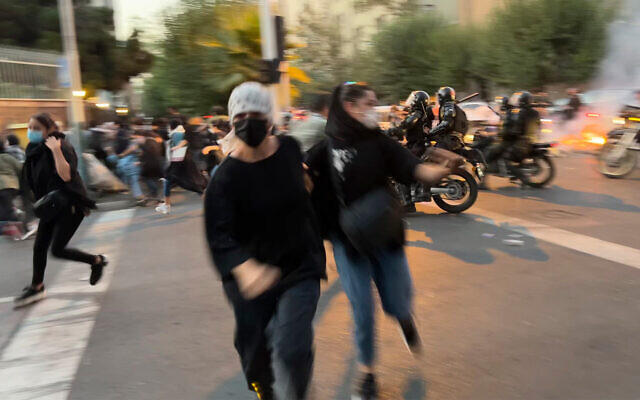 Women run away from riot police during a protest against the death of a young woman arrested for flouting the country’s conservative dress code, in downtown Tehran, Iran, September 19, 2022. (AP Photo)

In another development, several official websites, including those of Supreme Leader Ayatollah Ali Khamenei, the Presidency and the Central Bank, were shut down, at least briefly, as hackers claimed to have launched a cyberattack on state agencies.

Central bank spokesman Mostafa Qamarivafa denied that the bank itself was hacked, saying only that the website was “inaccessible” due to an attack on a server hosting it, according to the official IRNA news agency. The site was later restored.

Iran has been the target of several cyberattacks in recent years, many by hackers who have voiced criticism of its theocracy. Last year, a cyberattack shut down gas stations across the country, creating long lines of angry motorists unable to get subsidized fuel for days. Messages accompanying the attack appeared to relate to the supreme leader.

Amini’s death has sparked protests across the country. Police say she died of a heart attack and was not abused, but her family have cast doubt on that statement, saying she had no previous heart problems and that they were prevented from seeing her body.

In a telephone interview with BBC Persian on Wednesday, her father Amjad Amini accused authorities of lying about her death. Every time he was asked how he thinks she died, the line was mysteriously cut.

The UN Human Rights Office says morality police have stepped up operations in recent months, resorting to more violent methods, including slapping women, hitting them with batons and pushing them into police vehicles.

US President Joe Biden, also addressing the UN General Assembly on Wednesday, spoke out in support of the protesters, saying: “We stand behind the brave citizens and brave women of Iran who are demonstrating right now to secure their basic rights.” “

The UK also released a statement on Wednesday calling for an investigation into Amini’s death and urging Iran to “respect the right to peaceful assembly”.

Raisi has called for an investigation into Amini’s death. Iranian officials have blamed unnamed countries for the protests, which they say are trying to foment unrest. 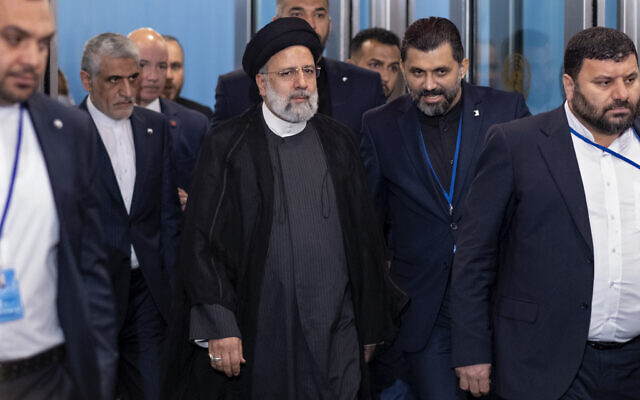 Iran has grappled with waves of protests in recent years, largely over a long-running economic crisis exacerbated by Western sanctions related to its nuclear program.

The Biden administration and European allies have been working to revive the 2015 Iran nuclear deal, in which Iran restricted its nuclear activities in exchange for sanctions lifting, but talks have been deadlocked for months.

Speaking to the United Nations, Raisi said Iran was determined to revive the nuclear deal, but questioned whether he could trust America’s commitment to a deal.

Iran insists its nuclear program is for peaceful purposes. It began expanding its nuclear activities after then-President Donald Trump unilaterally withdrew the US from the 2015 deal, and experts say it now likely has enough highly enriched uranium to build a bomb if it chooses to.