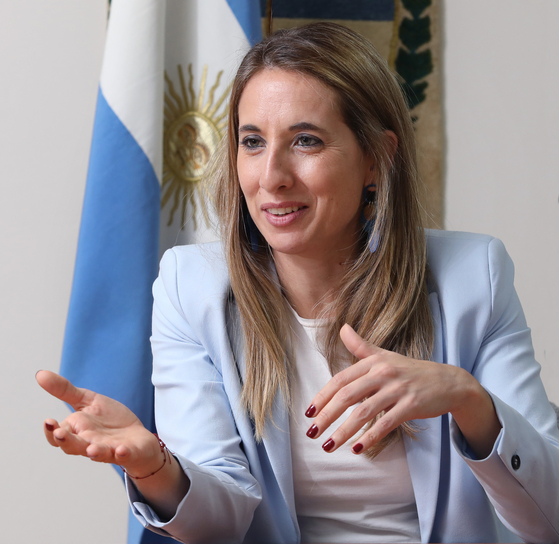 “Argentina is committed to changing the way we produce and consume, although historically our population has suffered most from climate change, although they have not been the main culprit,” Nicolini said at the Argentine embassy last Thursday in Seoul. “That’s why we say we need the financial help and the technology to be able to produce better and faster and to break all obstacles.”

According to an April report by the World Bank, countries in Latin America have lost the equivalent of 1.7 percent of their GDP annually over the past 20 years to climate-related disasters. Without action, the report says, up to 5.8 million people in the region could fall into extreme poverty by 2030.

Argentina, which experienced a historic recession linked to the impact of the pandemic, reported a poverty rate of 37.3 percent in the second half of 2021.

Nicolini, who arrived in Korea last week with a concrete agenda on climate change and energy, met with members of the Green Climate Fund and the Global Green Growth Institute, as well as executives from Posco and Korea Gas Corporation to discuss lithium and hydrogen, two Buzzwords in policy discussions about cleaner and more sustainable forms of energy.

The following are edited excerpts of the interview in which Nicolini explains how climate, pandemic and energy issues are linked and why she believes addressing these issues with Korea could save both countries time and energy.

Q. Argentina and other countries in the Global South have not historically been the major contributors to greenhouse gas emissions, but have nonetheless been subject to widespread climate change impacts in the form of wildfires, floods and droughts. How do you see the gap between industrialized and developing countries?
A. Developed countries have pledged US$100 billion annually to help developing countries deal with the effects of climate change. And that still hasn’t happened. The means of implementation [of emission reduction plans] and finance will be the main topic on the agenda of the COP 27 in Egypt in November.

I think the reactions to the war in Ukraine showed that these countries don’t have no money. Take, for example, Germany’s announcement that it would invest 100 billion euros [$100 billion] in its armed forces and defense. The money is there, it depends on how you allocate the funds.

Will Latin America as a region bring a coordinated agenda to the COP 27 climate conference in Egypt in November?
Latin American climate authorities will meet virtually at the end of the month to issue a joint statement on the negotiating principles that we will bring to COP27. Previously, each Latin American country brought different sized delegations with many differences over budgets and agendas.

Latin America is the most unequal region in the world. […] What we need for the region is a comprehensive insight into the loss and damage to our ecosystems from wildfires, floods or droughts and how this is affecting our economies. There needs to be a complete transformation and change in the rules of the financial architecture and the way we do business with each other to make a real difference.

Also Read :  Bitcoin Is As Costly to Environment As Beef Production

Can you summarize for us what Argentina intends to do on its own against climate change?
Although Argentina accounts for just 0.7 percent of global emissions, it has unconditionally increased its climate ambitions in recent years. We are committed to reducing our emissions by 27 percent by 2030 and achieving carbon neutrality by 2050. We are working on wind energy in Patagonia, solar power plants in the northern parts of the country and nuclear energy.

We’re looking at both blue and green hydrogen, and I say blue because, as you know, we have the second largest shale gas reservoir in the world. Natural gas is not a long-term solution but is suitable for the medium-term transition as it emits fewer greenhouse gases than oil and coal.

Soybean production, a huge staple for Argentina, is known to have led to deforestation in Argentina for years. What is being done to address this issue?
Soybean production in Argentina has been a very profitable business and one of the problems we have is that farmers are burning forests to make room for soybean fields. We fight these practices and try to regulate them. While we cannot stop producing soybeans, we must find a more sustainable way that doesn’t impact the ecosystem.

How do you envision Korea’s role vis-à-vis Argentina?
Argentina and Korea have a lot in common in the science and technology sector. We really admire how Korea has developed its technology. At the same time, Argentina is also a technological powerhouse in the healthcare sector, nuclear energy sector, satellite sector and agricultural sector, so I believe we can share many of our experiences to learn from each other and other things. Posco has already made major investments in the lithium sector and we are currently designing our strategies for hydrogen, so I expect more agreements between the two countries in the near future.

Also Read :  ‘I have thrived in this environment’: Gun midcourter Casey Adamson is loving every moment back home at Seymour

You mentioned earlier that issues of gender equality and climate change go hand in hand. Can you explain that in more detail?
Women generally devote more time and effort to caring for their families, which means that the added challenges they face as a result of climate change will prevent them from finding the time to grow personally and professionally. It is also important that women make the decisions about climate change policies to ensure they are designed from a more equal gender perspective.

Finally, despite having nothing to do with the climate agenda, Argentine Vice President Cristina Fernández de Kirchner recently faced an assassination attempt. Why do you think the world is seeing more such assassinations of leaders, even in democracies?
The incident was very worrying and it is of great concern to the nation. I think part of that has to do with the increasing polarization and all the hate speech that’s popping up not just on social media but in mainstream media as well. I think that these types of actions that we have seen not only in Argentina but in other parts of the world threaten not only the lives of the leaders but also democracy itself.