Introduced in 2013, the Ideal clinic The program is one of the Ministry of Health’s most important measures aimed at improving the quality of care in public health facilities in South Africa. The program (full name is “Ideal Clinic Realization and Management Program”, ICRM) aims to ensure that clinics have good infrastructure, adequate staff, sufficient medicines and consumables and good administrative processes, among other things.

Now, four new studies together suggest that while some progress has been made in recent years, the program has had a limited impact on the actual and perceived quality of care patients in Gauteng receive. In some cases, staff see Ideal Clinic certification as merely an exercise in ticking boxes. Three of the four studies were part of a larger 2015 rapid assessment study of the implementation of the program in 45 Gauteng hospitals.

The studies were presented at the Public Health Association of South Africa’s 17th Annual Conference in Durban last week, whose theme was ‘Building Back Better: Public Health Resilience and Recovery’.

Effects on the quality of care

In one study, clinicians were asked about their opinion of the ICRM program and its impact on quality of care.

When assessing ICRM compliance, a clinic can be rated as either non-achieved, silver, gold, or platinum. As quality improves, clinics should move from lower to higher classifications. 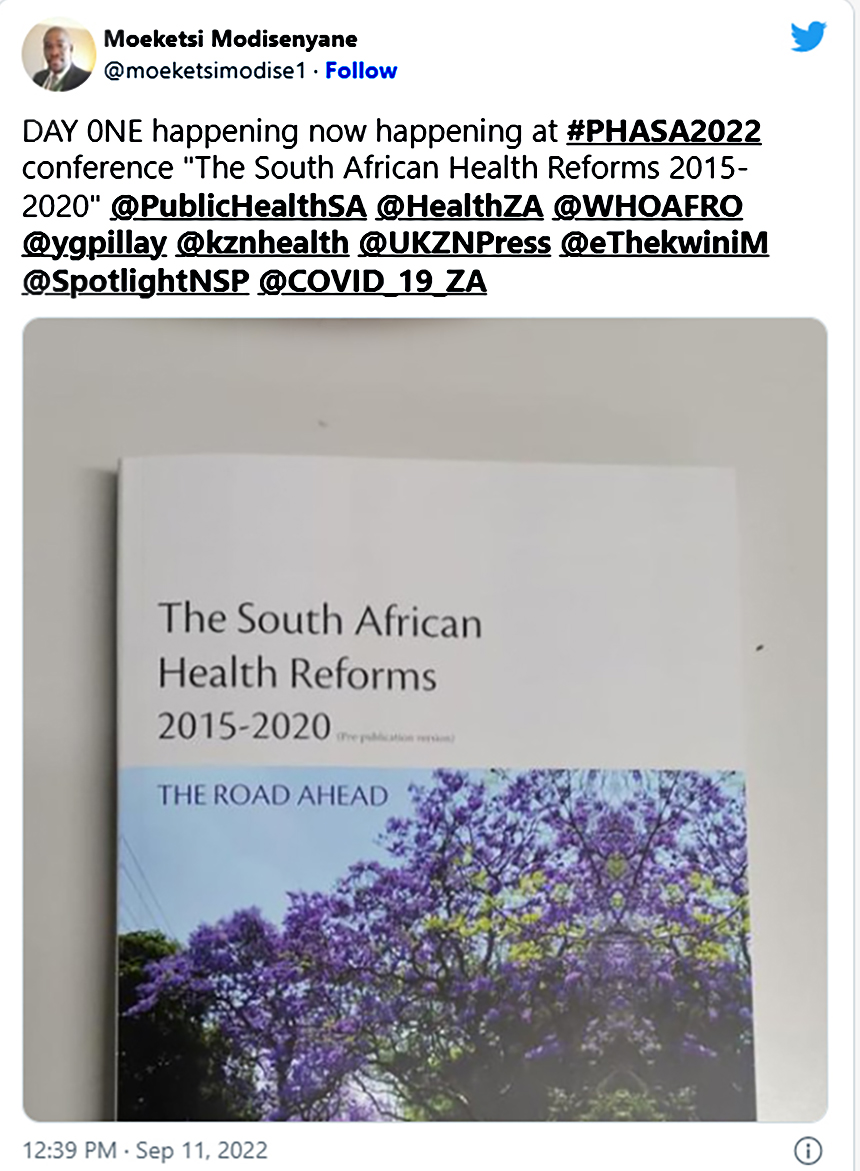 “We assessed the impact of the program and identified factors that promote or hinder the implementation of ICRM progress and maintaining ICRM certification,” said Idah Mokhele, one of the study authors. The researchers surveyed 335 healthcare workers from 45 clinics in Gauteng from February to August 2021.

The study identified several gaps in ICRM compliance. Only 20% of clinics used date and time slot appointments and some had drug shortages. Eighty percent of the clinicians surveyed had a general understanding of the ICRM program, but there was no real difference in level of knowledge of the program between the various ICRM certifications.

Respondents were also asked about their confidence in being able to implement the program. Confidence was highest for silver and platinum certified clinics and lowest for non-achieved clinics.

People with low confidence were asked why. The reasons given included human resources – too few staff or training and support for implementing the program – and poor hospital conditions such as inadequate infrastructure.

One participant was quoted as saying: “The ICRM is only on paper and is not perceived as an instruction manual. It is viewed by staff as harassment, done for inspection purposes only.”

Read more in Daily misfit: “Covid-19 is blamed for shortcomings at Ideal Clinics in the Free State”

Mohkele said, “More needs to be done to invest not just in the program itself, but also in our healthcare workers … who are meant to serve people, to actually be able to make the impact they’re meant to have.”

A smaller study, housed within the larger rapid assessment study, examined how many clinics in Gauteng had achieved platinum status since the program’s inception in 2015, and examined how healthcare professionals perceived platinum certification.

A total of 138 employees from the 27 platinum-certified clinics were surveyed. Of these, just over a third (35.8%) said the ICRM program had not been a success, citing poor clinical conditions in general, lack of staff, lack of equipment and poor infrastructure. According to Jinga, those who viewed the program as a success attributed it to implementation planning and readiness and clearly defined roles, as well as the motivation to address structural and resource challenges in the clinics.

The finding that poor clinical conditions persist at some clinics despite attaining Platinum status raised the question of whether Ideal Clinic status translates to improved operations or is it just a matter of ticking boxes. “I think it’s important to let healthcare workers know that this isn’t about ticking boxes. It’s about the day-to-day quality you offer to patients. So it’s like a culture, not just getting the highest certification,” Jinga said.

One of the things that the ICRM wanted to address was long patient wait times in clinics. Wits University’s Refiloe Cele presented a subset study that was part of the larger quick review, looking at how long patients spent in clinics. It suggests that ICRM certification reduces wait times, although there are some interesting nuances.

At 45 clinics in Gauteng, 441 patients (approx. 10 per clinic) took part in a so-called time-in-motion study. They were observed from the time they entered the clinic until they left, with timestamps recorded by research staff at each service station the patient visited.

Waiting times were calculated as the time difference between gas stations. The total length of stay in the clinic was also calculated and separated into over or under three hours, as the ICRM dictates that patients should not spend more than three hours in a clinic and wait no more than 10 minutes to collect patient records.

The results showed that the majority of patients spent three hours or less in clinics. According to Cele, while the aggregated waiting time did not differ significantly by ICRM status, clinics classified as not reached had the longest waiting times.

The aggregated median wait time for services at platinum status clinics was 63 minutes, for gold 71 minutes, for silver 63 minutes and for missed patients 112 minutes.

To assess hospital wait times compared to the private hospital standard (which Cele says is one hour or less), they were also broken down into times greater or less than an hour. According to Cele, the aim of the ICRM program is to prepare public sector clinics for the introduction of state health insurance. The results were significantly different as the majority of patients waited more than an hour in clinics.

Mokhele also presented a study (part of the Rapid Review) that examined whether patients’ perceived quality of care matched their experience in clinics.

Of the 1,788 patients surveyed from February to August 2021, 70.2% stated that the quality of care was perceived as high. As expected, patients in clinics with ICRM status reported more frequently that they received high-quality care.

Despite this high percentage, however, many patients complained about their experience at the clinic in qualitative open-ended interviews – 31.7% of patients reporting high quality of service had complaints, while 69.6% reporting poor to poor treatment of moderate quality, had complaints. 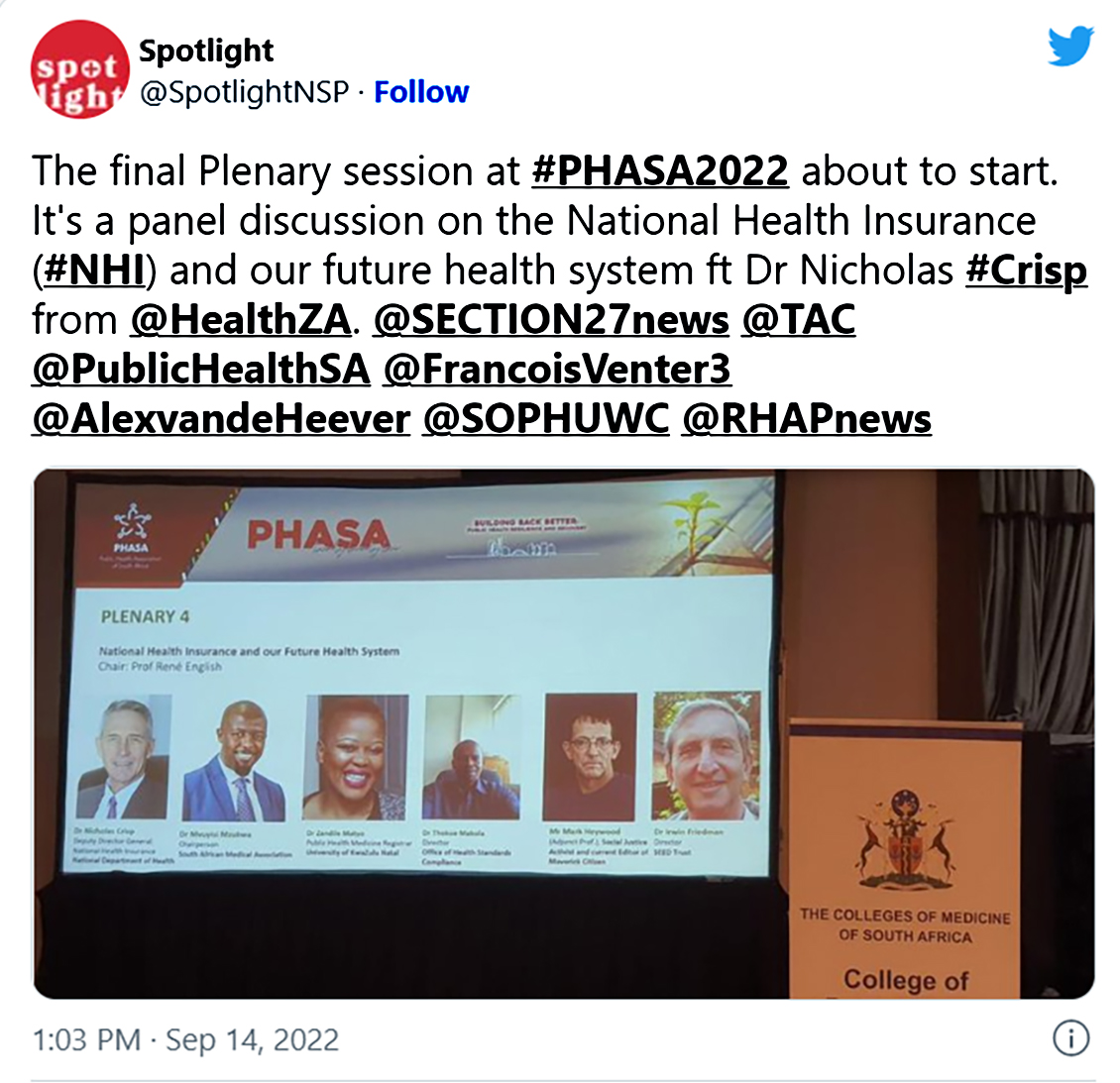 Complaints included long waiting times in the clinics and inadequate infrastructure at the facility, e.g. B. Lack of outdoor accommodation or enough seating in waiting rooms. Some wanted staff to be more professional and communicate better, and also wanted more privacy in disclosing health information.

According to Mokhele, this illustrated that there is a discrepancy between patients’ experience and their reported/perceived quality of care. This may be partly due to patients’ gratitude for free access to services and relatively low expectations of the services. “That means they may overestimate their quality of service if their expectations are low,” she says. DM/MC

This article was published by headlight – Health journalism in the public interest.